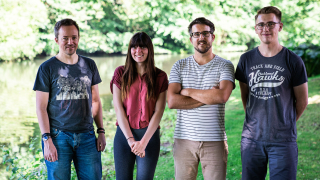 Creative agency Fluid Ideas has added four staff to its team, including a digital artist who has worked on videos for singer Ellie Goulding and rock group The Wombats, and a co-founder of Derby’s Bustler Market.

Steve Askey has joined the image and motion team at Derby-based Fluid Ideas as a CGI, special effects and motion graphics artist.

He has more than 20 years’ experience in the field and has created visual effects for music videos and a number of films, including short sci-fi movie Pulsar, starring David Gyasi and Jesse Buckley.

Web developer Stuart Costen has joined the agency from Marketing Derby, where he was a digital marketing executive. He has more than 10 years’ experience of website development and digital marketing.

Stuart co-founded the popular street food market in 2017 with three friends after visiting similar events in Birmingham and Sheffield. Bustler Market has so far attracted more than 100,000 visitors.

Rebecca Utley, a graduate in commercial photography from the University of Derby, has joined Fluid Ideas as a photographer and account handler in the image and motion team, which will see her involved in shoot planning and co-ordination, art direction and image processing.

Making up the quartet of newcomers is Liam Allman, who is studying information technology at the University of Derby. He has joined as a web developer on a 12-month placement.