Have you e-met our latest recruits yet? 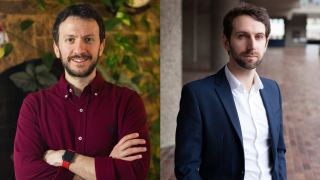 We’re pleased to introduce Gianluca and Ben H, who have been settling into Fluid’s ever-expanding web and systems team.

Gianluca is a Front End Developer who works closely with our web designers to make our clients’ websites look brilliant, whilst being functional and responsive across a variety of devices. Since he joined the team in September, he has brought his skills to a number of client web projects, including Derby County Community Trust, Lifeways and Exemplar to name a few.

Ben H is a Full Stack Web Developer, and brings a wealth of expertise to the role, with strong emphasis on back-end Drupal development. He’s been getting to grips with the Fluid client base since he joined the team, working on projects for Wine & Something and Inspired Villages. When he’s not supporting our client base with his web dev skills, Ben H is likely found making music – having played keyboards in a death metal band and at a German techno festival.