The rise and fall (and rise) of the QR code 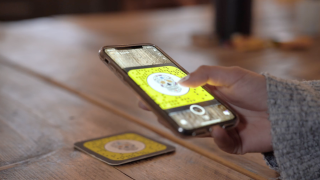 Eventually in 1994, Denso Wave (a subsidiary of the Toyota Group) developed a cheeky, little barcode that could be scanned in any orientation up to 10 times faster than any other code at the time and it could also hold up to a whopping 7,000 characters…the QR code (Quick Response code) was born!

Being one of the very first technologies to instantly connect the real and digital worlds, the QR code was expected to be the technology world’s brightest new star. However, reality soon put a dampener on such high hopes.

Requiring an additional application, along with accidentally opening inactive websites, and codes not being scannable in poor lighting, meant the QR code’s popularity and credibility dwindled. It was often easier to use good old ‘finger power’ and type in a URL than endure the faff of lining up a smartphone camera to read the code, especially in the dark!

In 2015, long after most had written off the QR code, Snapchat gave a helping hand by launching QR-based Snapcodes, a social technology that allowed users to easily follow their friends. Shortly after, the likes of Amazon, Google and Instagram all started to see the value in QR’s again. Hooray!

In 2017, Apple’s iOS 11 incorporated a native QR code reader built into the camera app, this gave QR codes a whole new lease of life, doing away with the loathed support of an app and making scanning easy, instant and accessible to all. Double hooray!

Today, with a quick scan of your smart phone, you are now taken direct to the digital world of your choice. Technologies, such as the cheeky QR code can take a while to find their niche, but when they do, they are suddenly the best thing since sliced bread.‍