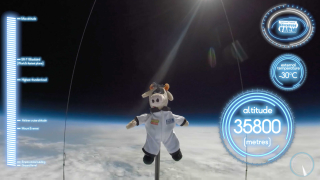 The design of the maze at the National Forest Adventure Farm in Staffordshire was revealed at a launch event this week when the attraction’s mascot Crumpet the Cow flew 36km to the edge of space.

More than 1,300 people tuned into Facebook Live to see Crumpet make his journey.

Fluid Ideas, which looks after the farm’s digital, social media and paid advertising activity, devised and ran the launch event.

Every second of the mascot’s two-and-a-half hour voyage was captured on a 4k high-definition, 360-degree digital camera, and visitors to the farm for the event were able to experience it for themselves with virtual reality headsets.

Crumpet sat in a specially-designed rig attached to a hydrogen-filled latex balloon which expanded to the size of a small house.

At 36,000 metres, the balloon burst and Crumpet parachuted back to earth, landing in a farmer’s field at Topcliffe, North Yorkshire.

The annual Maize Maze at the National Forest Adventure Farm in Tatenhill, near Burton upon Trent, attracts more than 45,000 visitors a year and is made up of 600,000 maize plants.

It offers three miles of paths, bridges and viewing towers in a 10-acre field and this year’s design will officially open on Saturday, July 13. The maize was planted on May 1 and will reach 8ft by mid-August.

“Social media is a busy space for businesses and we’re always looking for ways to cut through the noise. We’re privileged to work with the farm which, like us, is always innovating and allows us to push the boundaries – such as by sending a cow to space!”

The agency’s digital strategy has led to a year-on-year increase in online ticket sales for the farm as well as growing awareness through digital stunts such as Facebook Live Easter Egg Hunts and the World’s First Facebook Live Scare Attraction.